It recognizes the noble marines who defended it and enjoyed it for 500 years.

High-end pure Pisco, distilled from quebranta grape musts that are finishing their fermentation. Packaged in a high-quality French bottle, a replica of the one used between the 16th and 17th centuries.

Pisco Armada is a distillate of quebranta grape musts. It reminds us about the history that links the Pisco with the Sea, evoking the Spanish and Peruvian navies in their fight against pirates and buccaneers, in order to keep the maritime routes open and to allow our national distillate to be consumed in North, Central and South America and in the old world. With Armada we remember the nobility and courage of those sailors who defended it and enjoyed it almost 500 years ago.

Pisco Armada is packaged in a high-quality French bottle, which is a replica of the one used between the 16th and 17th centuries for spirits, preserving the old manual packaging and labeling system.

The storage of the pisco in stainless steel lasted two years and the product was packed in a French bottle similar to the one used in the 17th century. After six months in the bottle, Pisco Armada is labeled for sale.

Download the app Pisco Armada on your smarthphone, scan the main label on the bottle or on this website and the journey on the "Unión" sailboat will be about to start. 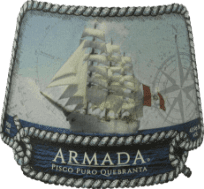 When the pisco crossed the sea

The wealth after the Viceroyalty of Peru received the protection of the crown, as well as other merchandise from the other viceroyalties of the Spanish Kingdom, such as Flanders and Naples. The South Armada was formed in the Pacific, Callao was its base and its ships and artillery were made in Peru. Its endowments, officers and seamanship came from the Naval School, which was created on November 1st, 1791, with a Royal Certificate of the King of Spain. It continues its operations to the present day.

The Navy of the South became the Peruvian Navy and the Spanish frigate Prueba, became the flagship of Peru. Its first name was Protector and then it was renamed as President.

The continuity between the two navies came from sharing the same mission, to keep the maritime routes for the commerce of Peru open. They endured bloody combats against pirates, corsairs and buccaneers, as well as navies from other countries. Stories that appear in logbooks from those ships detail how our enemies tried to get hold of the Peruvian "brandy" or sweet Nazca wines that were highly appreciated at the time. If it hadn't been for the Spanish and Peruvian navies, our grape distillate, later known as pisco, would not be the emblematic drink of this part of the world, since it wouldn’t have reached the markets where it was successful. The pisco was present in North, Central and South America, generating so much jealousy and envy that Chile tried to appropriate its name, unlike Bolivians who baptized their grape brandy as Singani.

The label of Pisco Armada is decorated with an illustration of the Sailing Training Ship, BAP Unión, the longest in America and the most modern ship in the world. It was built in the SIMA Callao Naval Shipyard, and was commissioned on January 27th, 2016.

Pisco Armada recognizes the noble marines who defended it and enjoyed it for 500 years.

To enter, please declare the following: